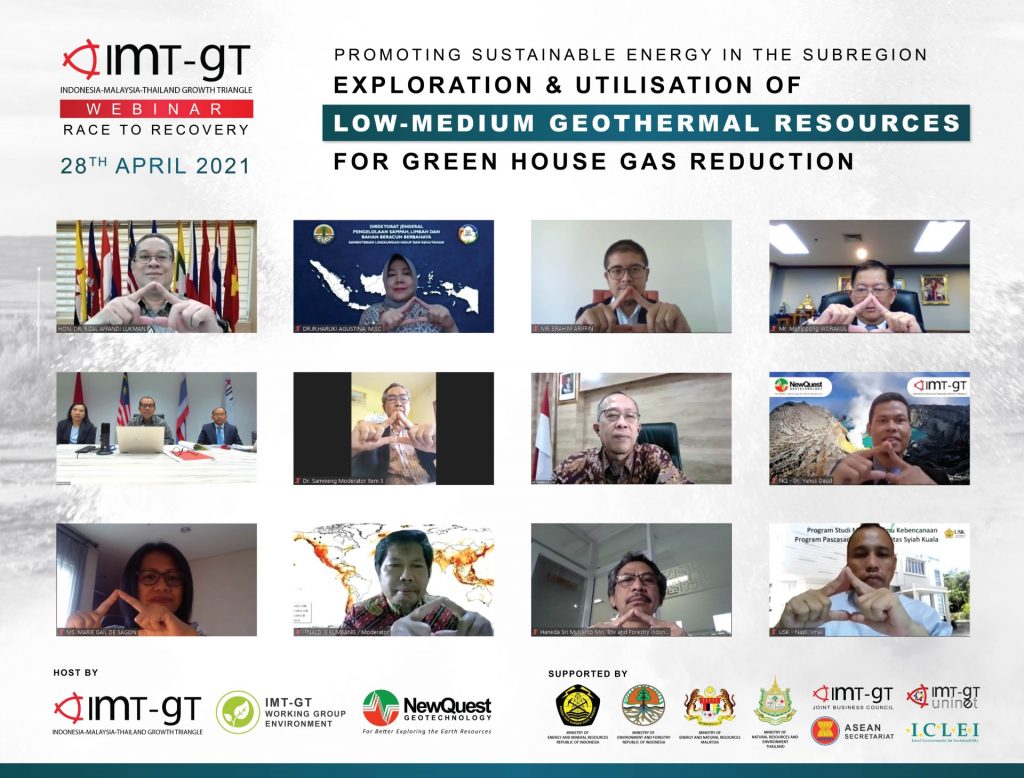 Acknowledging that sustained economic growth can take place only when there is a healthy natural environment, IMT-GT will mainstream environmental considerations in its cooperation agenda during the Vision 2036 period. The scope of the environmental cooperation covers: Low carbon economy, including, but not limited to, sustainable urban development, and promotion of renewable energy, energy efficiency, and green mobility and Sustainable management of natural resources and protection and conservation biodiversity ASEAN through Indonesia and Philippines accounts for about 27% of the world’s total geothermal power plants with a combined installed capacity of 4 GW. In the next decade, ASEAN will remain the center of global geothermal development base on development plan; Indonesia plans to add 6 GW of capacity and Philippines 1.4 GW.

Low to Medium temperature geothermal resources in ASEAN, spreads not only in Indonesia and the Philippines, but in almost all ASEAN countries.

Collecting from many sources; Malaysia, there are at least nearly 300 MW of geothermal potential that can be developed from 3 locations; Peninsular Malaysia Region The geothermal survey at Ulu Slim, Perak, 148 MW, other sites are Lojing in Kelantan, Ulu Langat and Batang Kali in Selangor, and Sungai Denak in Perak. In Sabah/ Labuan Region in Apas Kiri, Tawau 85 MWe and Segaria – Sungai Jipun – Gunung Pock area in Kunak 40.25 Mwe, 1 exploration well has been drilled in Tawau prospect and stop until now.

Thailand, according to a study by Department of Alternative Energy Development and Efficiency in 2006, 112 hot brine sources are found in regions of Thailand except in the northeastern part. Water temperatures on the surface level ranged 40°C–100°C. The current power production from geothermal energy is 0.3 MW from binary cycle powerIn Fang area.

Besides the indirect-use of geothermal energy in generating electricity, it also has direct-use heating and cooling potential such as for swimming/bathing, space heating or cooling, agricultural application, aquaculture application and industrial processes (drying, extracting or processing). These potential of geothermal direct-use can be beneficial for the people and community living near the geothermal power plant, as it can support their economic activities and productivity.

All IMT-GT countries signed Paris Agreement on April 22, 2016 and has ratified it in September 2016 ( Malaysia ), November 2016 ( Thailand ) and Indonesia October 2016 through Law No 16 of 2016. GHG emission mitigation from energy sector is targeted at 314 – 398 Million Ton CO2 by 2030, through RE development, energy efficiency & conservation implementation, clean technology application, and reclamation of post mining land. RE development including Geothermal to contribute around 170 MT Co2, in other word RE utilization up to 2030 will kept 170 MT Co2 from entering the atmosphere. In Indonesia, every 1 KWh shift from usage generating fossil energy to PLTP will reduce carbon emissions by 0.0094 tonnes (Carbon Neutral, 2019).