The Indonesia-Malaysia-Thailand Growth Triangle (IMT-GT) is a subregional cooperation initiative formed 1993 by the governments of Indonesia, Malaysia, and Thailand. Driven by its aim to accelerate economic and social transformation in less developed provinces and states within three countries, the IMT-GT has been expanding its geographic scope and intensifying its efforts, benefiting more than 81 million people to date. It currently comprises 14 provinces in southern Thailand, eight states in Peninsular Malaysia and ten provinces in Sumatra, Indonesia.

Since its inception, the IMT-GT has been experiencing and extended economic growth demonstrated by the threefold increase of the subregion’s Gross Domestic Product (GDP) over the past decade. To date, the GDP per capita of the IMT-GT is higher than that of the Association of Southeast Asian Nations (ASEAN). In addition to that, trade between member provinces and states has been rising steadily over the past two decades, increasing from less than US$ 15 Billion per year in the early 1990s to over US$ 120 Billion per year in 2014.

To enable the IMT-GT to achieve these targets, one of the key areas that is being looked into is the development of physical connectivity. Realising its importance, the leaders at the 10th IMT-GT Summit committed to the implementation of projects worth a total US$ 47 Billion to further develop the physical connectivity within this subregion.

Most of the projects that are currently being implemented is expected to be completed, at the latest, by the first round of the 2017-2021 IMT-GT Implementation Blueprint. The project related to physical connectivity are categorised into six areas:

The IMT-GT recognizes that to meet the growing demand triggered by population growth and economic development, there is a constant need to expand and modernize the existing physical transport infrastructure. For better inclusivity, the expansion of the transport network to secondary cities, smaller towns and rural areas is crucial. To this end, the IMT-GT will continue to mobilise the necessary resources for the development of transport infrastructure over the next fives years and beyond. Additionally, it will continue to give priority to the implementation of programmes and projects that expand and enhance physical connectivity, to realise its vision of becoming an integrated, innovative, inclusive and sustainable subregion. 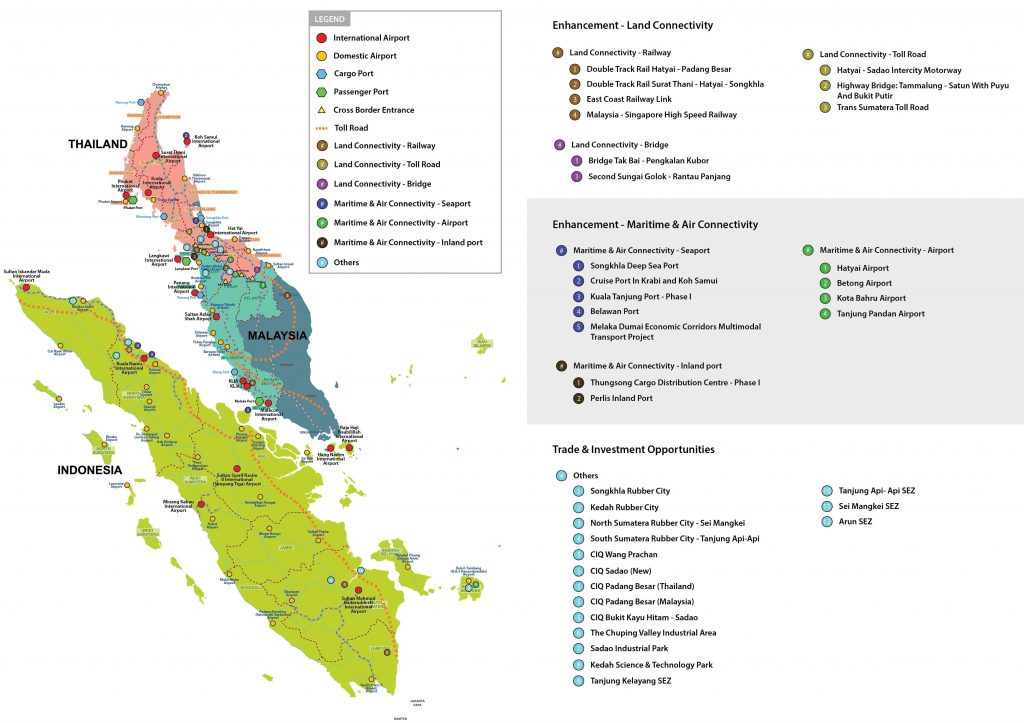